The JVA were delighted to host Cynthia Coleman Sparke, an independent researcher, author and lecturer on Russian pre-Revolutionary works of art, and regular consultant on Fabergé to deliver a talk earlier this month as part of its Continuing Professional Development programme.

Cynthia traced the meteoric rise of a modest jewellery business that became suppliers of the ultimate Easter gifts to Russian empresses. How did they do it? We joined Cynthia as she 'Zoomed' us through the materials and techniques that defined the enduring appeal of the House of Fabergé, the business innovations, and the patronage that ensured its prestige.

As appraisers and valuers many of us have acquired a special sixth sense. It could be just an inner feeling, or an instinct usually activated when presented with an object of beauty and exceptional quality. The ability to be able to recognise these attributes is perhaps a gift, enhanced and developed over many years of experience and continuous education. Many of us have been in the privileged position to handle some of the world’s most precious pieces of jewellery directly. This ability to appreciate and recognise these intricacies when handling something so desirable is perhaps one of the most satisfying aspects of our profession, so when this presentation was announced, I along with many of my colleagues in the JVA were eager to register our interest in great anticipation.

As a member of the JVA, along with a large attentive virtual audience we were presented with another privileged opportunity, a comprehensive insight into the world of Fabergé. We were treated to a wealth of information, too much to include everything in this brief review, so what follows is a small taste of what we discovered.

Cynthia’s webinar began with the early history of Fabergé, from the Company’s beginnings through to the early life of Peter Carl Fabergé. Carl was introduced into the world of Fine Art inspiring him to become one of the most renowned jewellers and suppliers of ‘Objects of Virtue’. Working through from the late 19th into the early 20th century.

In 1882 Carl took on sole responsibility of the company. He proceeds to develop Fabergé further by producing exceptionally high-quality pieces and employing the very best workmasters under the direction of Erik Kollin, his head workmaster.

By 1885 Fabergé was appointed Supplier to the Court of Tsar Alexander III. The Emperor was the first member of a European Royal Family to commission pieces from the Company. He considered Fabergé to be one of the finest goldsmiths in the world. He was quick to recognise the ingenuity and the quality of work, reflecting the skills of finest Russian Craftsmanship available.

During this year, the Tsar commissioned the very first Imperial Easter Egg. A simple and elegant gold egg with a white enamelled exterior, complete with a ‘hen and yolk surprise’. The commission was a success and continued from 1886 onwards with Fabergé given complete freedom to produce future and progressively more intricate Imperial Easter Eggs, each containing a ‘surprise’. Intriguingly, it has been established that fifty of these Eggs were produced but only forty-three have been accounted for. So, there are possibly another seven still in existence somewhere in the world.

Following on from this, Cynthia continued with a fascinating story concerning a scrap metal dealer who purchased a gold Egg for £8000 with a view to making a profit but he over- estimated the scrap value of the material, so he kept hold of it. Thankfully, he had the sense to investigate and research his purchase and it was later identified it as being the lost third Fabergé Imperial Easter Egg which was then sold to a private collector by Wartski for £20m in 2014. On hearing this enthralling account, I think many of us felt there may still be a small chance of discovering other lost Eggs; we all live in hope.

Eventually Carl relocated the House of Fabergé into larger premises in St Petersburg, with extensive self-contained workshops and an elegant showroom. Here he continued with full control, directing every aspect of production, and overseeing the workshops.

The presentation continued, accompanied by a series of wonderful photographs adding to our fascination.

Cynthia explained how the House of Fabergé gained numerous Royal Warrants as Royalty from all over Europe sought out the skills for producing desirable items of exquisite designs, combined with fine unsurpassable craftsmanship. Commissions were placed for all types of gifts with the Patrons confident in the knowledge that nothing left the workshops unless they were perfect in every respect. Carl insisted that any substandard items were destroyed and scrapped, so the company’s reputation was maintained throughout.

If a design required a certain colour, or texture then an appropriate gemstone was selected to achieve the desired result. He used every type of gemstones available for example, chalcedony, nephrite and rock crystal, however, he did not hesitate to incorporate fine gemstones and diamonds as and when required. Using these design techniques Fabergé was able to create bespoke pieces, to meet a client’s requirements and produce a design to complement an occasion.

We were then introduced to the techniques and materials incorporated into the creation of these wonderful pieces of art. Fine guilloché enamelling techniques produced in a range of colours and undercut designs creating glorious effects and reflections like shimmering Moire Silk being just one example.

Another very surprising technique called samorodok was used to create an irregular ‘molten surface’ texture. This is achieved by heating the object, (a cigarette case for example), to an extremely high temperature and plunging it into ice cold water as the surface starts to melt. This rapid quenching freezes a fluid or nugget textured design onto the surface, the final finish was often allowed to remain, creating a very radical but naturalist, tactile matt texture.

Cynthia proceeded to show stunning images of several hand carved hardstone naturalistic animals. The collection included a pair of frolicking rabbits and an unbelievably cute mouse. Experts agree, to truly appreciate the appearance and quality of these wonderful pieces they not only needed to be seen but if possible handled. They often report that a Fabergé figure has a personality, an unsurpassed quality embedded into a simple gemstone, often conveying a feeling or an emotion from within. These qualities became tangible when Cynthia produced an image of one of the most endearing of all the Fabergé animal carvings. In 1907 Fabergé was commissioned by King Edward VII to supply a carved hardstone model of his loyal Norfolk terrier, ‘Caesar’. Carved in a pinky/blond chalcedony, set with bright ruby eyes and an enamelled collar inscribed, I belong to the King. We were amazed how this adorable miniature conveyed the little dog’s personality, captured, and embodied in hardstone for eternity.

Towards the end of this fascinating presentation, we were introduced to my personal favourite items. A collection of naturalistic gold and enamelled flowers in rock crystal vases, complete with the double refraction optical effects creating the impression of water. This can only be Fabergé.

Cynthia explained how old black and white photographs from the archives were examined in fine detail to identify pieces which had been lost or had simply disappeared. The experts examined these old images in great detail, ingeniously, looking at the reflections in the glass sided cabinets for clues.

Perhaps from a Valuers perspective, one of the most important pieces of information was provided at the end of the presentation. We were told how, after The House of Fabergé ceased trading in 1917 many of the highly skilled workmasters continued to produce fine quality pieces of jewellery, which can be misidentified as being pre-1917 Fabergé originals. This problem is compounded by the fact that the original Fabergé Punches were sold on and were sometimes used on these later items. The moral to this is possibly to presume that any item presented for valuation is probably ‘wrong’ and the onus is on us the Valuer to prove beyond doubt that it is ‘right’. We were encouraged to contact Cynthia directly or to seek out the opinions of other renowned experts together with our own JVA Fellow, John Benjamin, who can assist with all the aspects required to obtain an accurate appraisal and value.

This wonderful presentation into the world of Fabergé has inspired us all to seek out pieces to view first-hand. Wartski in London, The Buckingham Palaces Tour, (Check for the current displays on view before attending) together with various Museums are all good possibilities.

Cynthia is also the author of a wonderful book ‘Russian Decorative Arts', available direct from her website Coleman Consulting. Highly recommended if you wish to find out more about this fascinating subject and other aspects of Russian decorative arts. 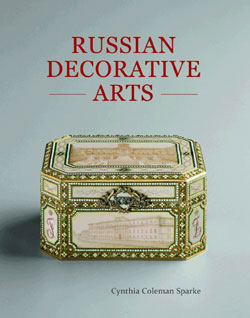 I believe we all have an instinct to develop our sixth sense to help identify and appreciate beauty, high quality and the skilled abilities of a Master Goldsmith. Cynthia provided us with a glimpse into the world of ‘The House of Fabergé’ and the objects of desire, a fascinating presentation appreciated by everyone.

May I take this opportunity in thanking Cynthia for a highly enjoyable presentation. We are all hoping for a sequel, as something to look forward to, perhaps one day in the near future. 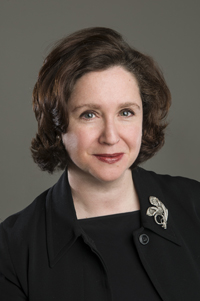 Cynthia is an independent researcher, author and lecturer on Russian pre-Revolutionary works of art, consulting regularly on Fabergé for auction houses. Having periodically grown up on and off in Moscow within a family of Russian art collectors, she was destined for a career in Russian art. Previously, Cynthia ran the Russian Department for Christie’s in New York and worked for Hillwood Estate, Museum and Gardens in Washington DC. This was followed by a restoration project at the Alexander Palace in Tsarskoe Selo, Nicholas II’s last residence.